I grew up in Seattle WA and in Jan of 2011 I moved all the way to the Washington DC area because my boyfriend got a new job with the government.  Robert is a wonderful man and we’ve been together for almost four years but he doesn’t want to live at Dancing Rabbit. We moved apartment buildings in August 2011 so two moves in one year really dwindled my worldly  possessions down to ten boxes worth of stuff, a massage chair, and a laundry basket full of clothes.  Deciding what to take to move to Dancing Rabbit is a lot different than moving around in the consumer world.  After reorganizing all my possessions, I’ve gotten rid of all the cardboard boxes and put everything into bags, plastic boxes, or baskets. I’ve gotten rid of some things and I’ve acquired some things, mainly tools because Robert accidentally left all my tools in Seattle after packing the U-Haul. This is a general list of my worldly possessions in October 2011~

I will be acquiring a Yurt Dome Tent to live in closer to the time I will be moving.  I hope this stuff all fits in a small compact car.  I will be shutting off my phone service with AT&T and my internet with Clear just before I leave for Europe on my cruise ship job so I will be going without a phone number for as long as I can. No keys, no phone number, and a car load worth of stuff, watch out world here I come.

My last day in the Concrete Jungle! I left the apartment for the first time in a week, again, last night to pack the car full of my stuff.  The spring air was fragrant and they cherry blossom trees were in bloom. I had almost forgotten what outside was like. Even my dragon table fit in the small car, which I was so happy about because I didn’t think it would fit and it would be sad to leave it behind.  Everything fit, but we can’t take my geo dome because it is too heavy and weighs down the car so much that the wheels scrape on the car when we drive over bumps.  I’ll probably have to pay to send it to myself, even though it might be a lot to ship because the metal rods weigh about 120 pounds. We’re going to start driving tonight. It feels strange to leave my old life and ways of living behind, also it feels exciting, and I’m feeling weird today as if I should be doing something more productive than writing in a blog and playing video games before a 16 hour road trip to move to an Ecovillage.

Here is a picture of my stuff in the Outdoor Kitchen when we unloaded it upon my arrival. 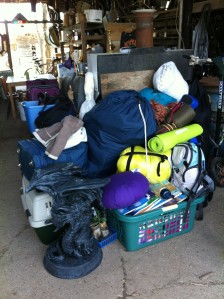 My Stuff In the OK

The mushroom workshop was rainy but fun. We brought back 116 logs for people at Dancing Rabbit, good thing they all fit in the truck. I got some good knowledge about mushrooms, and I’m now a little mushroom farmer at DR with my 45 logs in the forest.

I’ve been hanging out and cleaning out my things. The mice have gotten into everything, even plastic tubs I thought were sealed from mice have mouse nests in them. It feels good to get rid of things and give some things away to good homes. I’ve gotten most of my things down to 4 pieces of luggage, which is a bit more than I could carry around, but it is satisfactory to the amount of stuff I feel like I should own in this world.

Most of the things I used to have either went to good homes or I put it in a place to be used more communally. Everything I have fits in 80 square feet, well actually 80 round feet living in my dome, with enough place for me to sleep, although I rarely ever sleep at home anymore.

Back in the city again. This will be the longest I’ve spent in Seattle for about 4 years. I plan to stay here over the winter, giving workshops, connecting with new clients, and making money. I arrived only with two luggage bags and a backpack of possessions. One luggage bag had mostly clothes. The other had general things like toiletries, quartz crystals, and electronics. In the backpack was food for the two day trip as well as my Kombucha scoby, maple syrup, several bags of dried shiitakes, and my pet mint plant from DR.

My studio is about 200 sq ft, including the bathroom. There is a shared kitchen across the hall. I have my own bathroom with a bathtub and my own refrigerator! Oh my gosh so exciting! And what is more exciting is that I can afford it. I work a 10 minute walk from my studio. I won’t be riding in a bus or a car for at least a week!

I brought everything I had in my two luggage bags. My mother had also been keeping 2 pieces of my furniture for me in her basement for about 5 years- a cabinet we call my “Harry Potter Cabinet” and a cedar chest made by my uncle. She also has a futon that’s been around as long as I have that she gave me to sleep on. My mother and I visited Bed Bath and Beyond along with 5 Goodwills all in one day to acquire household items I would need for my new studio- a blender, a pot, a pan, utensils, a plate, etc. There are many things from her house she has extra to give me, like blankets, sheets, cleaning supplies. Oh the joys of stuff when you have a house. I am so grateful to my mom.

Everything I own, including my possessions in Rabbit Land, would still fit in one van load, probably minus all my mushroom logs.