Wow, this month has gone by so fast. I’ve been all over the Mediterranean on my cruise ship job where I work at the top of the ship and entertain the children. Four months until I am at Dancing Rabbit, I know it is going to be here before I know it.  Even though I have been traveling to all these amazing places, this past ship contract on the Rotterdam has been the least fun one I’ve had so far, for various reasons, I guess they don’t nickname it the Rottendam for nothing, but I made myself a nice DR Wallpaper on my computer and when I feel like, “maybe life kind of sucks right now,” I just look at where I am going to be next year and it reminds me that no matter how sucky something might seem at any given moment, it shall soon pass and I’ll be on to the next exciting chapter of life.

Tomorrow is Thanksgiving, and I have so many nice things to be thankful for, but I will be spending Thanksgiving in airports and airplanes for about 8+ hours and then a hotel room all by myself in order to join another ship the day after.  I heard that some of my friends are going to be on a certain ship from March to May, and I’d really like to go with them, but I don’t think I want to delay my move to DR and be that silly girl who applies for residency for a third time. It will probably be much better to arrive in March anyhow, even though it is cold still, it will be nice to settle in before all the crazy visitors and interns arrive. Well, on to the next, won’t be very many children on the Statendam, and the ship will be cruising from San Diego CA to Ft. Lauderdale FL through the Panama Canal. Here are some pictures from this month:

Comments Off on November 2011

I came home from my second three week visit to Dancing Rabbit Ecovillage.  I went through everything I own, got rid of some stuff, bought a few tools, and got everything down to an amount that will hopefully fit into the small car that will drive me to Dancing Rabbit in March.  It is so weird to think that everything I own in the world fits into a small car, but it is also very liberating as well.  I will be leaving Arlington VA mid October and be off on my cruise ship job so I can save money for my move.

My name is Allison, but I decided I need a new name if I am going to move to DR because there is already an Alyson and an Ali there and I don’t ever want to be confused with them. After much discussion with rabbits, some emails with Nathan, and a weekend in West Virginia to the New Culture Summer Camp site for a work party, I’ve decided my new name is SunGee. Instead of shortening my name to the first half, I shortened it to the second half instead, changed the spelling, and squished it with my last name, because I didn’t want to be called Sun either and get confused with all the talk of solar energy at an ecovillage

I put my two cute cats on Craig’s List and a very nice couple gave them a home, I mean an actual home, like big house home, not a small room or apartment that they’ve been living in their whole lives. Bye, I’m going to miss you! 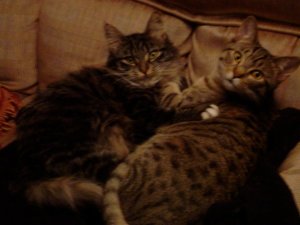 Robert had a nice 5 day weekend before I left for the cruise ships, weird government job days off. We went to a National Park in Virginia. This is probably the last nice picture I will have of us. 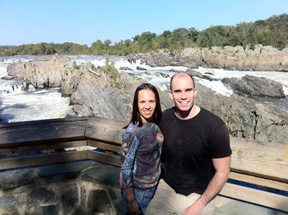 We put all my stuff in a closet where it is going to live for five months until I come back, put it in a car, and drive to Dancing Rabbit. Wow! Everything I own in the world in a closet! 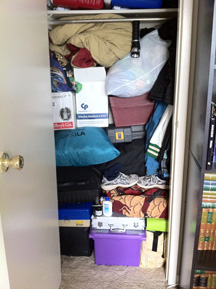 Comments Off on October 2011